Citrus season is underway – the limes arrived first and now the lemons are coming into season. There are two main varieties available – the Meyer – a rounder, slightly sweeter lemon believed to be a cross between a lemon and a mandarin or orange, and the Eureka, which is an oval shape and more acidic. Numulgi citrus grower Jan 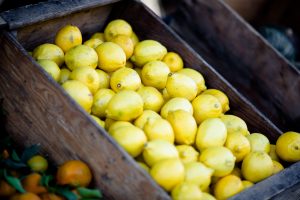 have plenty of juice, but the Eureka has a thick rind with a strong lemony flavour that makes it is better for zesting. Use lemon juice in dressings, squeezed on fish or avocado, or make a lemon ginger tea. And don’t waste the zest – if you’re juicing a lemon, always zest it first – you can store the zest in the freezer and use it later for making gremolata, adding to deserts, or mixing into your breadcrumbs. Find lemons at Rancho Limes and Neville Singh’s stall.

Fennel’s mild liquorice-like flavour complements and enhances so many foods. Use slivers of fennel raw and crunchy in coleslaw, with orange segments and salad leaves for a beautiful winter salad or cut bulbs in half and roast with some olive oil until sweet and tender to serve as a side dish with chicken or fish. Look for fresh fennel at Summit Organics and the Everest Farm stall.

It’s a great time to get out into the vegie garden and plant some winter crops. Vegies like snow peas, broccoli, kale, cabbage, cauliflower, lettuce and carrots can all be planted  now, and the cooler weather means there are lest pests about to nibble on your plants. Once you’ve prepared your soil, pick up some organically raised seedlings from local growers One Organic, where you can also get plenty of helpful advice on caring for your plants.

One of the best things about eating seasonally is the anticipation. Your favourite fruit or vegetable may not be available for a few months, but when it comes back in season, you can’t wait to start eating it again. In summer, it’s fruits like mangos, watermelon and dragonfruit, while in the cooler months it’s things like avocados, spinach and brassicas like cabbage and broccoli. Right now, it’s time to ge t excited about winter produce, including delicious and nutritious broccoli, fresh from the  Everest Farm at Eungella near Murwillumbah. Look for it at Will Everest’s stall.

The Jumping Red Ant farm at Duranbah is harvesting  new season local avocados and Kate from the Organic Avocado is back.  Look out for new season Fuertes, a buttery avocado that’s great in guacamole.

Autumn is traditionally harvest time for pumpkin and there is plenty about at the farmers markets now. Great in soups, roasted in salads, curries or vegie lasagne. Don’t throw away the seeds either  – they’re highly nutritious and a great snack. To prepare, give them a quick rinse, and rub off as much stringy pumpkin bits as possible.  Dry on a tea towel, then toss in a little olive oil and salt and roast  at 150 for about 20 minutes. Eat them as a snack, sprinkle on salad or on your pumpkin soup.

Cauliflower has become especially popular in recent years for creating cauliflower rice – a lighter alternative to steamed rice, (which also lets you to sneak more vegetables on to your plate). You can also use cauliflower soups and stews, baked with garlic and olive oil or mashed with garlic and butter and a sprinkle of parmesan. Find cauliflower at the Everest Farm stall, Jumping Red Ant or Summit Organic stalls.

The earthy flavour of mushrooms is perfect for these cooler Autumn nights. Try a mushroom soup, chicken and mushroom pie or pasta. For delicious locally grown mushrooms, see Gary at Wollumbin Gourmet Mushrooms.

This highly-nutritious leafy green is at its best during the cooler months and there should be a good supply from now on. There are three main varieties to look out for – each with a slightly different taste and texture, so it’s worth trying them all to find out what you prefer. Cavolo Nero is the dark green type with slender rumpled leaves and is good in soups and stews, Curly Kale is the one with frilly edges that’s best for kale chips or in salad and Red Russian is a sweeter, more tender variety, good in salads or pasta. Find kale at Summit Organics, The Salad Hut and Everest Farm.

Their fresh zing can make all the difference  to a meal and they’re great with seafood, desserts and drinks. Fresh limes now available from Rancho Limes, Jumping Red Ant  and The Salad Hut.

The apple season has begun, with a great pick of new season Royal Galas and Fujis (grown at Stanthorpe – the closest place to the Northern Rivers with a climate suited to apple growing), now available at the markets. Find them at McMahons Organic Apple stall, now back at the market, and the Costanzo Apples stall.l.

The North Coast produces some of the country’s sweetest and best tasting bananas but it’s unlikely you’ll find one in the big supermarkets as they favour the bigger, ‘better looking’ fruit from North Queensland. Your best bet for a local banana is the farmers markets – Neville Singh is one of the region’s best-known growers, and always has a great selection of Cavendish and Lady Fingers at his stall at New Brighton Farmers Markets. He also grows more unusual varieties, like the creamy Blue Java, aka the Ice Cream banana, the red skinned Dacca banana and the Plantain. Will Everest also has a great selection of local bananas.

Sprouts and microgreens are full of nutrition and can add extra crunch and flavour to almost any meal.  The Summit Organics stall has a good range, including sunflower and radish. For legume-based sprouts,  Sproutlovers (available from Denise Latham’s lettuce stall) have lentil, chickpea and blue pea sprouts.

Also known as the horned melon, these funky fruit look like little spiky cucumbers. You can eat them green, as you would a cucumber, or wait until they turn yellow, when they sweeten up and tastes more like a  kiwi fruit. Just cut in half and scoop out the edible seeds and flesh. Available from Glenyce Creighton’s organic produce stall.

One of the most versatile vegies, zucchini is good in almost anything  – from Thai curries to zucchini slice. Turn them into zoodles – a gluten free alternative to pasta noodles, or try zucchini lasagna using slices of zucchini instead of pasta sheets. Available from Jumping Red Ant and Everest Farm.

There’s plenty of fresh local chillies around to help you get a sweat up at your next meal. They’re available in varying degrees of heat, from milder long chillies to fiery habaneros. Chilli fans will also enjoy The Spice Palace’s harissa pastes, made with home grown chillies from Rob Cullinan and Duska Jefed’s farm at The Pocket. The milder green harissa, flavoured with coriander and preserved lemon, is great as a marinade for fish or chicken or as a simple green curry base, while the slightly spicier red harissa is delicious as a rub on any meat, or cooked with the onions in a curry.

If you haven’t discovered eggplant, now’s the season. This super versatile vegetable is at its best in late Summer/Autumn and is a great foundation for a vegetarian or vegan meal. Combine with zucchini, capsicum, tomatoes, onion and garlic for a healthy pasta sauce or use slices as an alternative to pasta sheets in lasagne. Roast and use as a pizza topping, add to curries or stir fries, or grill with a miso glaze for a tast y Japanese-style side dish. You’ll find a few different varieties at the farmers market, including the common deep purple variety, as well as white and purple striped, and the long eggplant –  also known as Japanese eggplant – which is available from Jumping Red Ant  And if you need an example of just how good eggplant can be, try the marinated and fermented eggplant from our fermented food stall Suria Foods.

Garlic is one of those staples you should always try and buy locally – imported garlic is cheap, but often bleached and sprayed with chemicals and will not have the same flavour. For some excellent locally grown garlic, try  Summit Organics or Kennedy Lane Farm.

Crisp, cool and refreshing. Slice thinly into salads, cut into sticks and serve with dip, create home made pickles or add a few strips to your gin and tonic. Find fresh local cucumbers at  Jumping Red Ant, Summit Organics and Everest Farm.

Also known as drinking vinegars, fruit shrubs are becoming the next big thing for cocktail mixers, and blended with soda water, they make one of the most refreshing  drinks around. Numulgi citrus grower Jane Boniface, of Rancho Limes) has recently launched a range of home made shrub syrups using produce from her farm and locally sourced fruit, including a Blueberry with Ginger and Blood Orange shrub, Strawberry and Rosemary, and Mandarin and Cardamom.