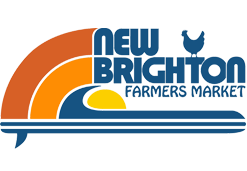 WHEN Garry and Jen Rodgers moved to their Newrybar property almost 20 years ago, they found the previous owners had left some beehives behind.

Although they had no experience or knowledge of beekeeping, they were keen to learn.

“We had this lovely old chap from Wardell come up and see us – he was in his 80s and was president of the bee society of the time,” said Jen.

“He showed us what to do and how to look after them.”

Fascinated, the soon bought another beehive and “it just grew from there,”said Jen.

Garry and Jen’s early forays into beekeeping went on to become The Honey Wagon, a stall at the local markets, including the New Brighton Farmers Markets.

They offer about eight varieties of honey, sourced from hives on their property, and from a collection dotted around the region, from Tyagarah to Lennox Head, and inland to Bangalow.

Each variety of honey had a different flavour, depending on what flowers the bees have had access to.

“For example, the Tea Tree that we collect from near Lake Ainsworth has a deep earthy flavour, almost like a molasses-type thing.”

One of the most interesting honey varieties on Garry and Jen’s stall is Active Jellybush – Australia’s equivalent to New Zealand’s Manuka honey, which is prized for its medicinal qualities.

Like Manuka, it’s produced by bees feeding on the Leptospermum bush, found on our coast. For reasons researchers are still trying to uncover, these bees produce honey with extremely high antimicrobial levels.

Garry and Jen regularly send their Active Jellybush samples for testing at the University of the Sunshine Coast, with activity levels measured using UMF or MGO factors. Levels at or above UMF10+ or 400 MGO represent medical grade.

All of Garry and Jen’s honey is raw, which means it hasn’t been heated, or pasteurised, during processing and retains all its health properties.

“Lots of beekeepers use heat to soften up the honey,” Garry explained.

“The bigger manufacturers do that. It makes the honey thinner, so they can process it quicker, bottle it quicker – it’s just easier for them. But it kills the good properties of the honey.”–